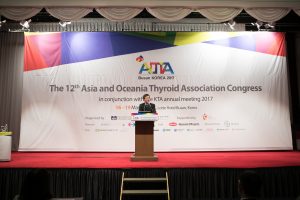 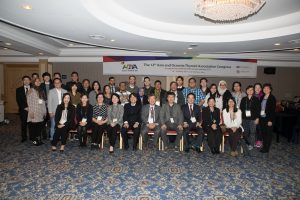 The congress started on March 16th with preconference activities including Thyroid Ultrasound Course and Joint Symposium by Working Group of Asian Thyroid FNA Cytology. In opening session, Prof. Duncan Topliss from Australia delivered an opening lecture with the title of ‘Recent Advances in Thyroid Diseases’ and a Memorial Lecture for passed Professor Emeritus Dr. Shigenobu Nagataki was dedicated by Prof. Shunich Yamashita from Nagasaki, Japan. 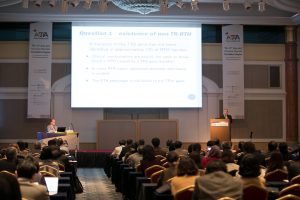 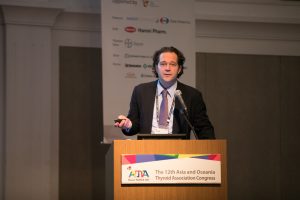 Scientific program were consisted of plenary lecture, 2 special lectures, 11 symposium sessions, 10 meet-the-professor sessions, 12 oral sessions and so on, which is the most voluminous program ever in the AOTA congresses. Totally 319 abstracts were submitted for scientific sessions, and 8 papers were awarded as distinguished abstracts (Prakash Gangadaran from Bangladesh, Hidefumi Inaba, Shinichi Suzuki and Yasuyo Nakajima from Japan, Soo Yeon Hahn and Eun Ju Ha from Korea, Sukriti Kumar from India and Xiaoxiao Cao from China).

AOTA prize of year 2017 awardee was Prof. Weiping Teng from China, but AOTA prize lecture was cancelled due to absence of awardee. LOC supported 29 registrants with travel grants (500 USD for each) based on country of presenter (low –middle income countries by World Bank) and quality of abstract.
The congress was a great success not only in the number of participants but in quality of scientific sessions. The congress was closed, pledging to meet again in the next AOTA congress which will be held in Sydney, Australia in 2019.